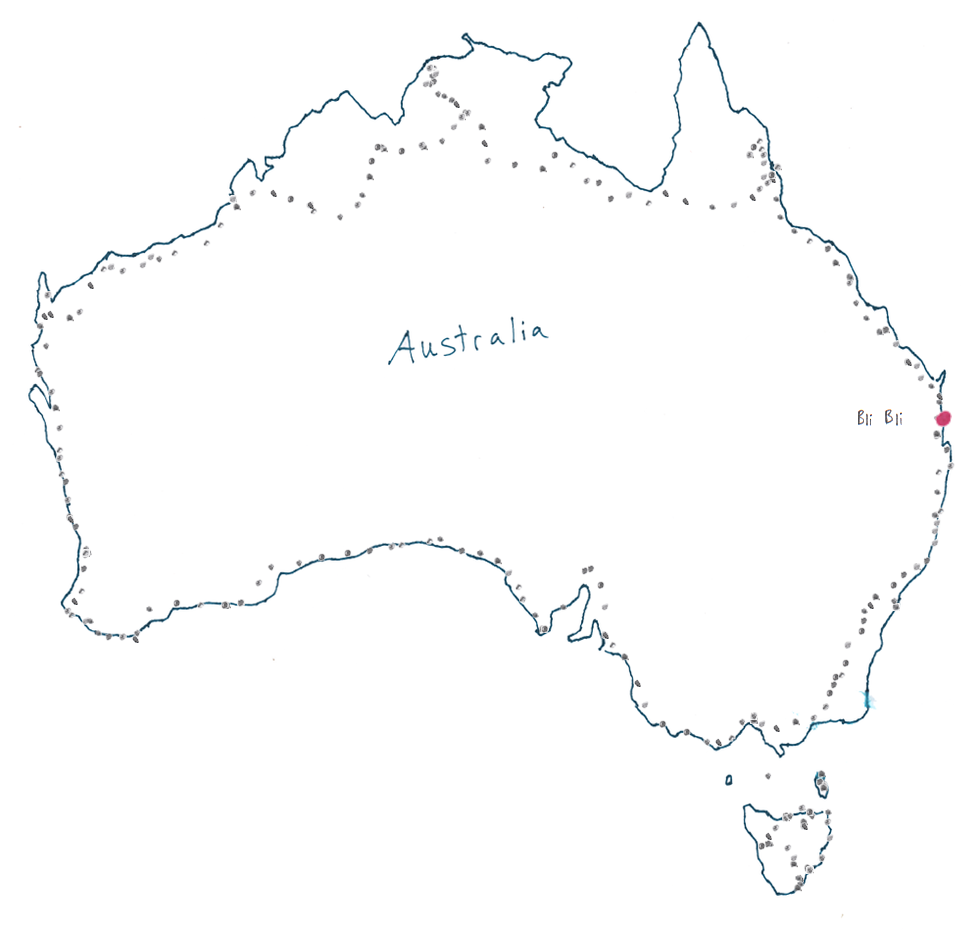 Man, this was quite a roller coaster of a day.

I think my body knew I could sleep in since it was up and ready to go at 5:30am. (it doesn't do this on other days). Left most of my bags at the caravan park office and biked on down to "Steve's Place" as some of the people call the zoo. This is the zoo that Steve & Terri Irwin have where Crocodile Hunter is based from.

The zoo was amazing. Granted I will probably see many of these critters (hopefully not the snakes) out in the wild...but at least they were all in one place for a change. The koalos were cute as expected. They kind of just wedge themselves inbetween tree branches and sleep (or eat).

Went and saw the snakes, they had the most poisonous snakes in the world there. You had to go through a couple of gates to get to the kangaroo area. It was a rather large field/wooded area surrounded by a pretty high fence. All of the kangaroos and wallibies (like a kangaroo, but smaller) were tame....mostly. I saw a kid about five years old run up to a wallaby and grabbed at it, startling the wallaby. The kid jumped back a little and started running. The wallaby jumped up onto the kid's back and held on, and caught a good five second free ride at the expense of a terrified kid running for dear life. Most people (sans kid) found it amuzing. I found a shaded corner of the area where a couple kangaroos were. I asked them if they would like to be in a clock photo, they acted indifferent so I assumed that to be a yes. I had taken so many photos the my flashcard was filled up so I had to actually pull out my laptop and copy thoe photos onto it. Geeky yes, but even better I god a couple good photos of the roos with the PC. A couple of flatlander tourists asked if I was doing research. "um, no".

I left the zoo around 2:00pm and although I only had about two hours of daylight left, I wanted to ride. Was a pretty fast ride overally. I looked on the map and figured I'd just cut out to the Sunshine Coast on one of the roads leading out there. Big mistake. The map I had didn't have half the detail and towns that actually existed there. I think the cartographer just said "fug it!" and drew a bunch of lines of the Sunshine Coast. The Sunshine Coast is one of those nice areas that a long time ago someone thought it would be nice to build a home. Later on, 10,000,000 other people want to live in this nice tranquil area. You get the picture.

The road I was planning on taking turned out to be a motorway...no bicycles allowed. So I got lost in a maze of residential roads. This also made it so I had to climb over one of the steepest hills I've came across. It was good to have an extended climb again for a change though. The funny thing was that I eventually crept up on this kid about 14, also riding his bike up the hill. I started chasing him, even broke into a 4 miles/hr pace in doing so. I could tell when he would look back, because he would start to pedal frantically. Eventually he got off and walked. This continued for awhile, eventually he saw that I was getting closer and got back on and rode frantically again. Eventually he gave up and started walking. I crept up on him and said "nice hill you have here." All he said was "I don't see how you do it!" with a bit of an irked tone.

For the next hour and a half, I was lost in the suburbs of a town that didn't exist. It was just housing complexes after housing complex. I knew where I was, yet I was lost since there were no major roads (that I could bike on) going where I needed to go. I had to ride in the dark for a long while, that sucked. I thought the Sunshine Coast was supposed to be better than the Gold Coast...but it was 10x worse to ride though. Eventually I came to the town of Bli Bli and there was a caravan park there. I went and got groceries and upon getting back to the caravan park, saw that the office closed two hours earlier. I thought about just camping in the caravan park, but then I had bad visions of large men who had day jobs being Brittney Spears' bodyguards waking me up in the middle of the night. I kind of stood there the window shades opened up. The woman looked a little pissed off that I was there. I said I could go somewhere else and she said "well...you are here." She said that she was trying to get bookwork done and had gotten distracted about ten times in the last couple hours after the office closed. We started talking and she forgot about that and got real animated. Over the next 40 minutes, she told me all about the tax codes, insurance, business BS, and overpriced chlorine distributors they have to put up with around here. She had an excellent memory, because her husband came out and she told him verbatium what I had told her. Wow.

The roller coaster went back down again though. I made dinner and read a little. Went to the bathroom and someone had jacked my battery AA charger. I was a little pissed about that, but there wasn't much I could do about it. I never really worried about it being stolen since I had left it in a lot sketchier places before. Oh well, what goes around comes around. Somewhere down the line the hand of fate will give a turd to the thief.

I decided to cheer up my mood a bit and changed into clean socks for the first time in three days.