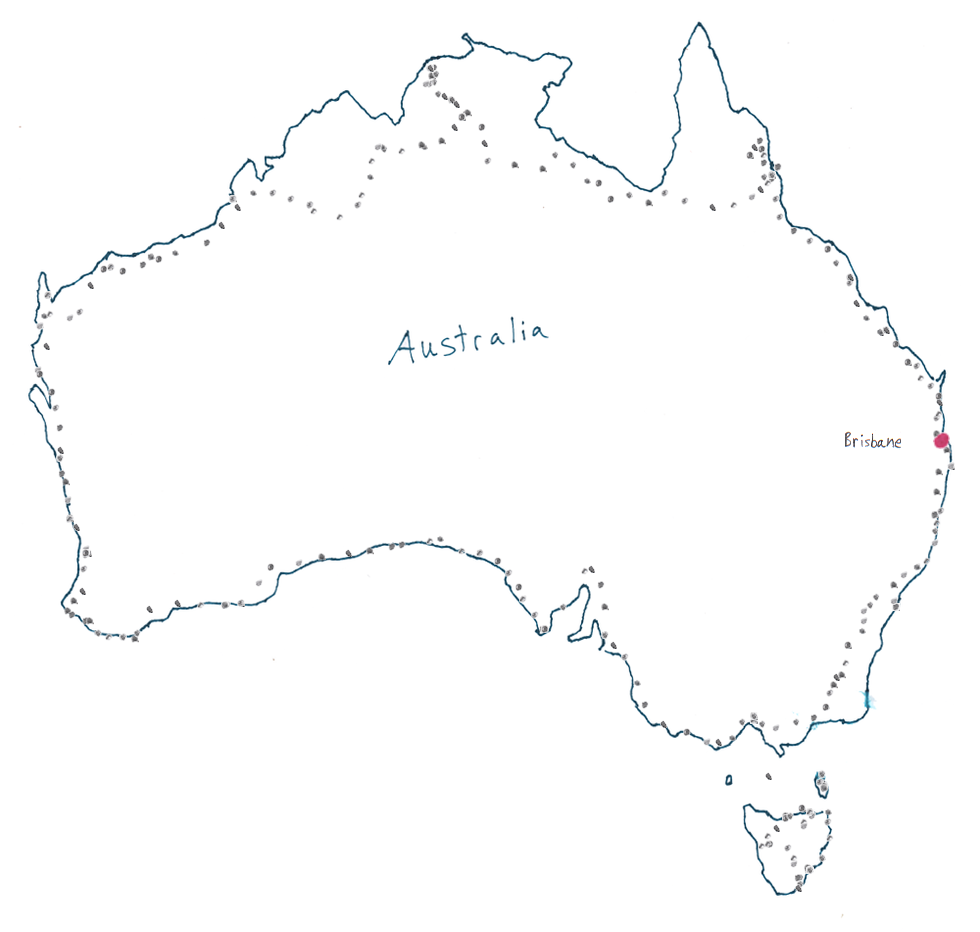 Today I went to Balmoral High School see the clock. Last year after the clock site was up and running, I received an email from Nick who is an art instructor at Balmoral. They ended up painting a clock on the side of their school and taking 60 pictures for the analog clock. It was cool to meet Nick and see the clock up close. I said to Nick: "Lotta work huh?"...he just laughed.

Was going to meet up with Maree's friend Simona at 8:00pm so I spent the rest of the day walking around Brisbane. Stopped at a sushi place and one of the girls saw my computer and asked me about my trip. I ended up getting a clock picture of them and some businessmen who were at the sushi place. Went to an outdoor cafe and wrote the rest of update number three. Right before I left, the most surreal thing happened. This guy came up and started talking to me. His breath smelled of booze and he was pretty unshaven. He seemed to be a little mentally unstable and just needed someone to talk to. Every time I would start to think he was a bit of a "nutter" (as they say down here), he would say something really profound about life. It ended up being a pretty much one sided conversation. He kept apologizing for talking to me for so long, hoping it wouldn't ruin my trip. 30 minutes later he still kept talking to me and standing closer to me to the point where I was feeling a little stressed. I started to push my bike towards the street and he said he'd walk with me up to the street. We got out there and said goodbye. I would turn to pedal off and he would yell "oh, wait!" and then give me another quick piece of advice. This happened about three or four times. Just then a huge fire engine comes by with all of its lights on and sirens blaring. It was having a hard time getting through traffic so it was moving pretty slow. The engine so loud I could hardly think, and it's red and blue lights were lighting up the whole part of the dark street. I heard a "CRAIG!" off in the distance. I looked back and it was this guy running back towards me...bumping into shoppers the whole way. By this point the noisy fire engine is right next to me stuck in traffic on one side, and this guy Raymond is about two feet from me on my other side. The bright lights from the fire engine were lighting up Raymond's bearded face. I motioned for him to hold off saying anything until the fire truck went past. Raymond ignored me and screamed: "CRAIG! DON'T EVER, EVER!, BE AFRAID!" He turned and ran off.

I walked up to the main market area where I was going to meet Simona...kinda contemplating what just happened. I ended up meeting Simona, she was holding up a sign that said "8:00" rather than "Craig". Cute joke.