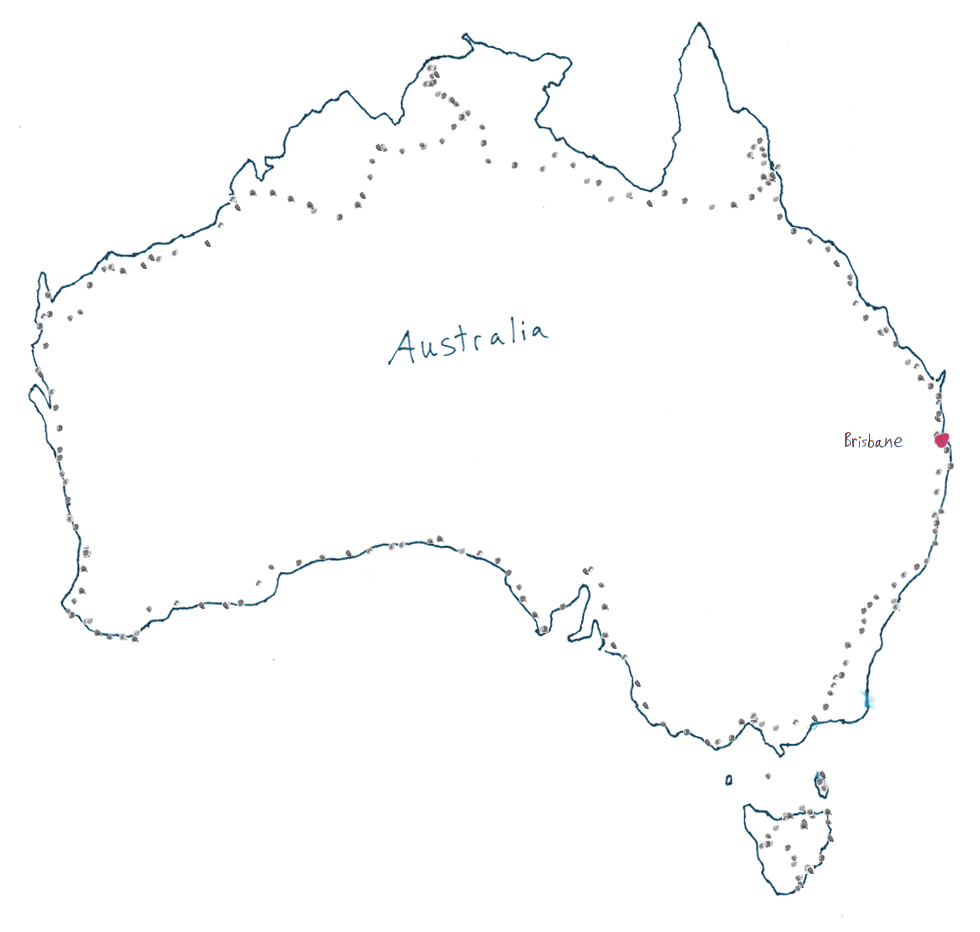 Man, this day was all over the board. Normally I would have filed it under a crap day due to 60 miles of suburbs, but interesting little things kept happening thoughout the latter part of the afternoon...so it wasn't so bad after all.

Woke up late...7:00am. Body must have trying to have been catching up on missed sleep from the night before when the bugs were keeping me awake. I figured it wasn't "that" far to Brisbane so I'd just take it easy and have breakfast.

Surfers Paradise it a little bizzare. It just seems to be these hi-rise hotels and apartments everywhere. Any waterfront is full of yachts and clean cut looking people. It looks like they didn't chase all the homeless out of town though like some of these type of towns are known for. I passed a park and there were a lot of homeless people sitting at the picnic tables talking with each other. Nothing else really interesting happened until I got to the outskirts of the Brisbane surburbs. It was pretty much just a standard right through housing devolopments and industrial parks until about 1pm. Stopped at a takeaway place and got some food. The kid working there figured out that I was from the US and he said "WOW!, I really want to go there." He asked if there are still a lot of drive by shootings and if I had met Mike Tyson. dunno and nope.

From here it took me about 6 hours to get to downtown Brisbane, about 25 miles away. Riding through suburbs is hell. Cars everywhere. Nothing interesting to look out, everything looks the same, you have to drive everywhere, and signs on new housing developments reading "this way to the high life".

I had a map of the greater Brisbane area so I didn't get lost, but it was hard to tell which was the best route since it was a jumbled mess of grey (good for biking), yellow (so so), and red (terrible) lines on the map. I cut through a park and when I rounded a corner it felt like the rear wheel was trying to slip out from under me. I concentrated really hard and thought about nice solid bike tyres that never go flat. I kept riding in denial that my rear tire was going flat...but it was. I stopped and did the usual ritual, except this time I had to fix the busted spoke also. I ended up spending an hour and a half in that residential neighborhood, since I decided to clean the drivetrain also.

I got riding again and the first of several interesting things happened. I climbed up to this road that was elevated. I look down and there are these three youths spray painting one of the walls. It didn't look like a dedicated mural wall, hence it would probably be classified as graffiti. They were very detailed about things and kept looking down at pieces of paper...probably stuff they drew up while in class. These two older guys walked past me and turned back around towards me. They saw I had my map out and asked me if I needed directions. I said no...just trying to figure out the best way into town. They gave me a whole slew of directions that I mentally lost after the first "turn left". The funny thing was is that they were a stones throw from these three kids spray painting the wall. I couldn't believe they didn't see the kids. It would have been something on par of Clash of the Titans had they seen them.

It got to be about 5pm, quittin' time for the workers, sidewalk ridin' time for the bikers. I'd get on these nice sidewalks and start to actually get going somewhere, then the sidewalk would magically stop and I'd end up in a terribly unsafe place and have to turn back around. I had a few more instances of having to backtrack, the worst was when I could see where I needed to go and could hit it with a rock, but there was no physical way of getting there...so it was back up a hill and a big circle around for me.

Excellent thing #2 happened when I was cutting through a cemetery. It was at the top of this hill and when I came out of the trees, the whole entire sky was bright read. It was probably the biggest sunset I have ever seen. Had I not randomly cut through the cemetery I would have missed it.

I neared a gas station as I felt my rear tire going flat again. I remembered I had forgotten to put in my tape around the valve stem of my tire when I last changed it. Sure enough, that is what was causing the flat. I changed the tire at the gas station. Changing the rear tire sucks, cause I have to undo all the bungee cords and haul all the crap off the rear. Ugh. But this is where Excellent Thing #3 happened. A guy is pumping gas into his car. He yells over to me something about my bike. He comes over and asks me where I was going and how the trip has been. We talked a little and then I went back to my bike and he went back to his car. Right as I was putting things back onto my bike he yelled "HEY!, I BET YOU CAN'T DO THIS ON YOUR PUSH BIKE!". I smiled knowing what was going to happen. He started the engine and roasted the tires all the way out of the gas station and onto the street. This was the first time I have ever seen an Australian roast their tires on dry pavement. Usually it is something I just see kids doing when it is raining. (which proves they are in fact lame, I came "roast my tire" on wet pavement also).

Traffic thinned out by this point and I could ride the major streets into town with no real problems. Excellent thing #4 happened right outside of central Brisbane. I was climbing up a pretty good hill and this cyclist passed me, I waved as he passed me and he kind of ignored me. He was pacing himself and working pretty hard. I went down a couple gears and put the hammer down on the pedals. I don't know where the heck the energy came from. I caught up to him and was neck and neck. I think I pissed him off since I caught back up to him on this steep hill, and my bike weight about 10 times more than his. If he just would have waved back to me he wouldn't have had to stand the humilation of getting passed on a hill by some greasy looking guy with a ton of crap on his bike.

Got into Brisbane and went to the hostel. There were two hostels next to each other. I saw four really cute girls about 20 years old go into the one on the left. I figured this would be the hostel for me, Granted I would probably never even see these girls again. It still made is seem like it was the better choice. Hopefully they weren't on the hostel payroll as decoys.

It was only after I looked in the mirror that I saw why people weren't as talkative with me as usual. I had grease all over my face and hands!

After clenaing up I walked towards downtown to get some food. There was this drunk (?) kid walking/stumbling down the street bumping in to things and screaming "DROP ME INTO BURNING ACID!". He kind of looked and sounded like Darby Crash from the Germs. He kept coughing because his throat was dry from screaming.

Tomorrow I'm going to go to the school that painted a clock face on the side of their school. It should be fun to meet Nick the art instructor and all the kids. Maybe tomorrow I'll even get around to sending out update #3, it has only been about three months since update #2....sheesh.