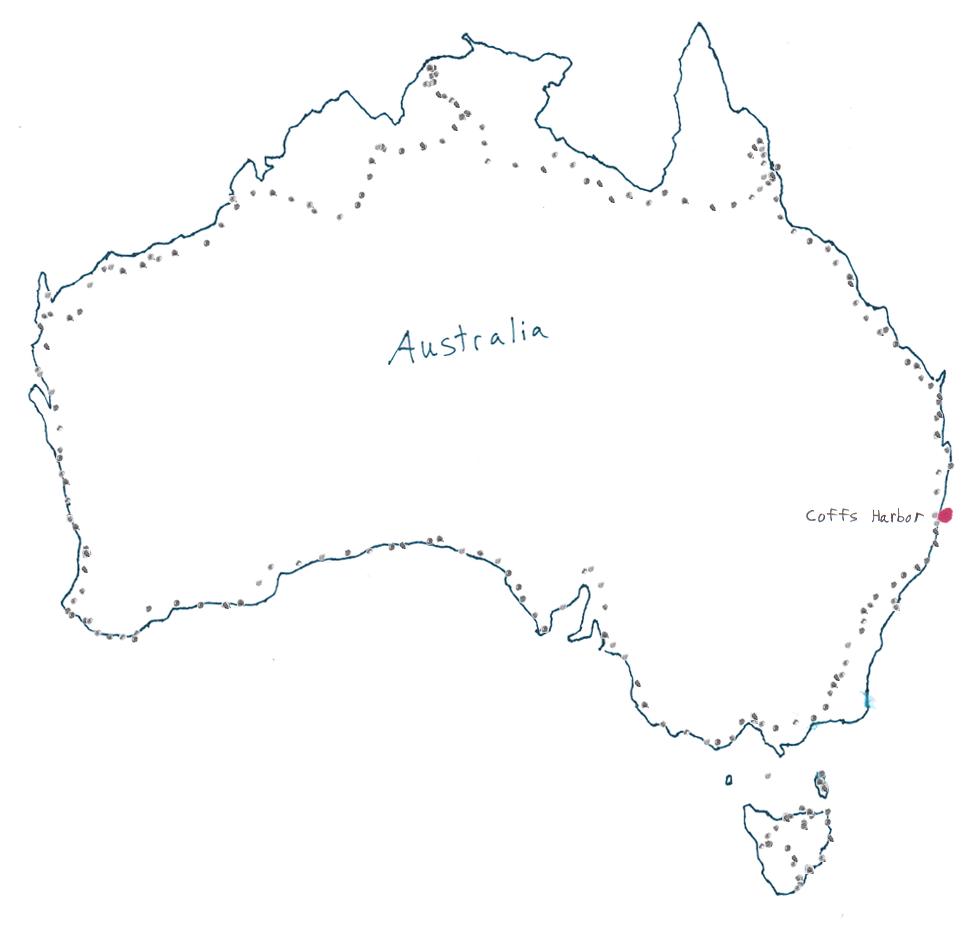 Woke up in the garden under the big trees, it was pretty nice, thought it did get a bit cold last night.

Was going to head out early today, but Greg at the hostel wanted to get a picture of me for the hostel wall with my bike and the cardboard clock. I decided to just mess around Bellingen and then just do a short day and go to Coffs Harbor.

Anyway, there are these entire walls of nude photos at the hostel. They are not nude-nude, but everyone has their rated "R" bits covered up with something fitting the theme of the photo, be it seashells, oranges, hats, or what ended up in my case...cardboard.

Julie, Greg and I went down to the bridge. Julie kind of acted as lookout as Greg and I stood under the bridge to take the photo. I had my touring bike up against the bridge support. I stood next to the bike naked, but covered more than half of myself up lengthwise.

It came out to be a pretty cool picture. He took one on my camera so I'd have one, but geez, it looks like I forgot to put it in below. Next time you are in Bellingen, Australia, you can look at the wall my photo if you are so inclined. Julie kept making these funny noises when people were getting near. She said that there was this older ouple who was walking over the bridge and every few seconds they would stop and look over the bridge at the water. They ended up crossing the bridge before they would have been able to see me. Would have been pretty funny if they had looked over and seen me. After we finished taking the photos, a yuppie looking couple, we'll call them Corbin and Sara Jane came down right by us, but didn't even turn in our direction. It was pretty funny how I was standing totally naked and they didn't even notice.

On the photo wall Greg has statistics of all the nationalities of the people posing in the photos. He is always looking to get photographs of people who hail from nations that are not yet on his statistics listing. There was once this guy from Slovenia who did not want to pose nude for a photo. Greg tried and tried to persuade the gentleman to take the photo...then he would have a new nationality to add to his wall. Nope, the guy wouldn't do it. This very attractive girl who was staying at the hostel said, "If I pose naked with you, then will you do it?" The guy replied "Where do we take the photo?"

We took a few more clock pictures and I had lunch with Julie. Said goodbye to the people and the hostel and was off. I biked about 5k (3 miles or so) and came across a couple with two girls riding horses. They asked me where I was headed. We got to talking and they wanted to be in a clock photo. They invited me in for a drink we talked for quite awhile. I had to get moving though since I had to get to Coffs Harbor before dark. I set off and had a nice ride through the forest. Right before I got to the highway my rear tire went flat. That ate up some time and I ended up getting into Coffs Harbor at dark. Rode around for awhile figuring out where stuff was and ended up staying at the YHA. Someone described Coffs Harbor to me as a "suburban house". I couldn't agree more. Can't find my mini-leatherman tool, poop.