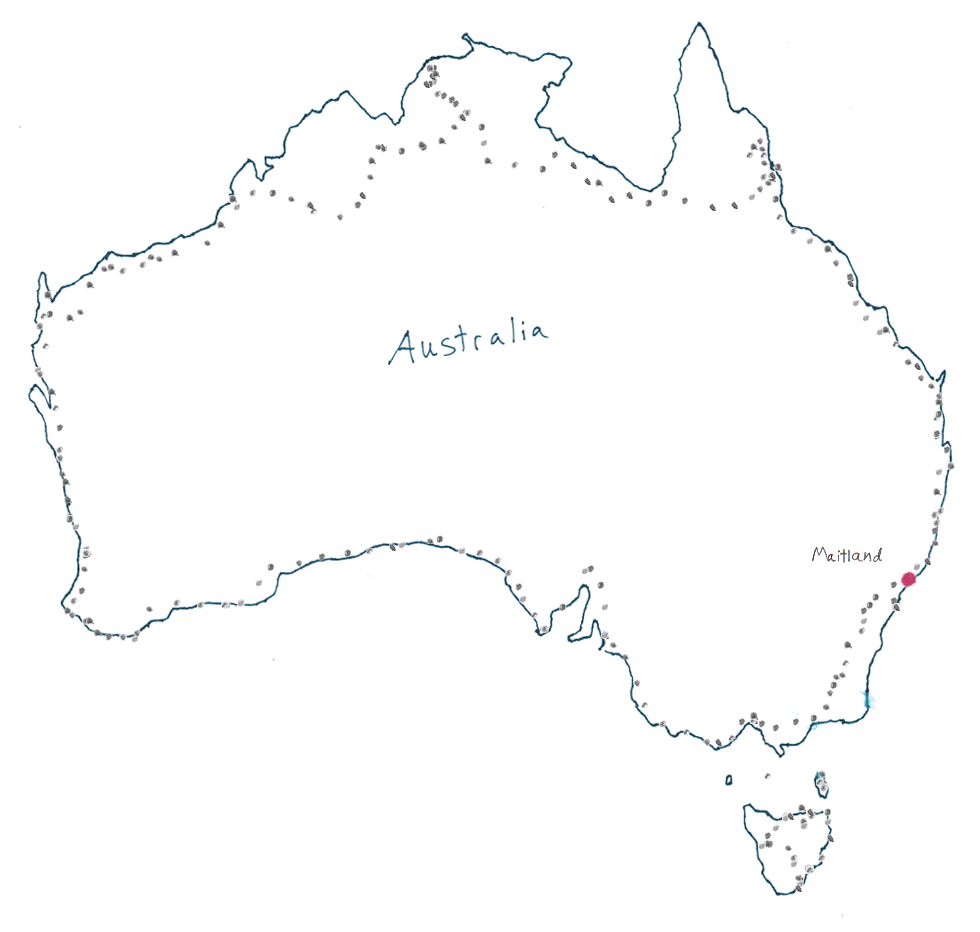 Slept in today even though I didn't want to, since I couldn't cook breakfast due to the gas shortage, I was packed and gone around 8:30. I was originally going to think it was going to be a bummer day, but it turned out alright..got 96k in by the time it was all said and done.

Got moving, ran into some cyclists on the way to Laguna and rode with them for awhile. Went across a plank bridge and one of their water bottles fell off so they slowed the pace down a bit. This was good because I was able to ride with them until the one rider caught back up. Clipped right along pretty fast. It was then that I realized I need to pace myself at a lot higher speed.

Got to Laguna, nice little shop on the side of a hill. Got some food and went out to the picnic tables out front and ate & dried my stuff out. There was this cute dog named Bella. Later I saw bella had something and was throwing it around, turns out it was the stuff sack for my tent. I cleaned it off in the dew on the grass and hung it out to dry. I probably spent 90 minutes there. After I left I had a lot better pace and good thoughts in my head, maybe it was the coffee. Got to Wollombi and pretty much passed right through it. I saw a bunch of grumpy looking kids and cute girls and stuff, then saw an Oz Experience Bus. Saw a woman working on some flowers with a wheelbarrow, thought it would have made a good clock photo but I didn't feel like it at that moment to ask her. Rocked on to the Pixies and thought up funny stuff for my vegemite contest on the clock site.

Got into Cessnook. Found a public bathroom and as I was going in I saw a wallet and a zillion credit cards in the bushes. I peed and then went back and got the credit cards and stuff. Went and found the police station. The policeman said thanks. I asked him where I could get on the net and he pointed me to the library. He told me to lock my bike up cause they have had a lot of bike thefts lately. The whole town kinda gave me the creeps. It was a larger town, but just did not have a good vibe at all. Thinking about the stolen wallet made me think about Grandma getting hit by that kid at Naches, how she was returning a wallet and got hit by him.

I went by the bakery, the girl seemed a little flirty. There were actually four bakery girls, couldn't get them to do a clock picture, they looked at me like I was from another planet. I gave them a card so they could see what they were missing out on.

Got out of town and on the Old Maitland road. It turned to gravel, I hit my front tire pretty hard and started screaming like a mafia victim for it not to go flat, it didn't. Traffic picked up, one oncoming guy even passed between me and another car. Everyone has to get somewhere right now. Reached Maitland in the late afternoon, seemed like a nice town. Got a bike tire, then went to find a store in the direction of the caravan park, what a BITCH this was. Probably went 5k out of my way and found a store. Funny how no matter which town you go in there are always some kids running around stealing shit. There were a bunch of these Eminem type kids making me leery. They said something to me but I ignored them. They went into the store and caused grief for the checkers. I got some food and tried to find the caravan park. Oh yeah, I came by the map and wished I could have a picture of the sign, then realized I had my digital camera and the problem was solved. The first caravan park was kinda dark and I couldn't find an offfice, so I decided to look for the second one. I knew where it was, but it was a pain to get to since it was on the other side of the highway. I got tired of trying to figure a way across so I lugged my bike up a pedestrian overpass and back down, got to the caravan park and my troubles still weren't over. I couldn't find the managers house since all signs were confusing. The woman said "can I help you" from the top of the stairs. I asked her about unpowered tent sites and she said "sure!". I felt a lot better off. Sitting here writing now...

Trip is going alright, nothing major going on, think I'm going to send out an update soon, since I don't know when I'm going to get the website online either..sometime soon.